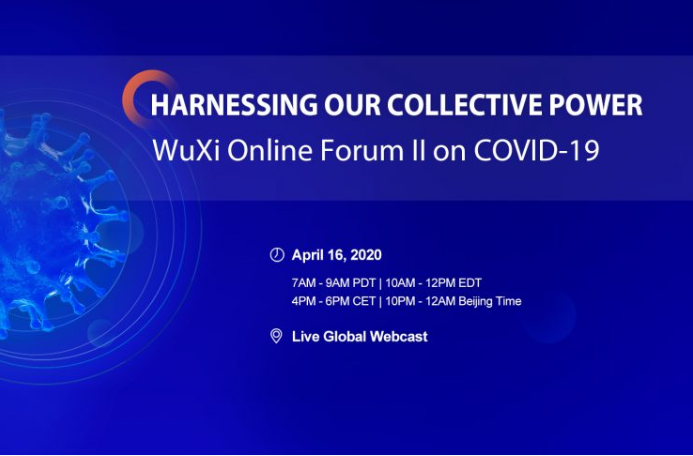 Forum panelists addressed this defining moment for the biotech industry and world, discussing lessons learned since the outbreak of the pandemic, the development of diagnostic approaches, and the prospects for therapeutic interventions and a vaccine in the near future. Through focused one-on-one conversations and an engaging panel discussion, scientists and CEOs provided insights into both their latest work and ongoing challenges as their companies pursue innovative approaches and much-needed solutions.

Remembering the Lives Lost to COVID-19

Diagnosis: Lessons from the Battlefield

Development in Time of Crisis

The Future of Epidemic Readiness

Prior to WuXi, Dr. Cai spent 10 years at Johnson & Johnson Pharmaceutical Research and Development leading multiple drug discovery programs in the therapeutic areas of inflammation and autoimmune diseases. She is a co-author and co-inventor to over 50 scientific publications and issued or pending patents. Dr. Cai is a Councilor of the American Chemical Society (ACS), a member of BayHelix, and a member of the UCSD Alumni Board. In her past capacity, she served as a Commissioner at the City of San Diego Science and Technology Commission, Chair of SABPA, and President of SDCA. Dr. Cai received her BS and MS in Chemistry from Peking University, PhD from The Scripps Research Institute, and MBA from UCSD Rady School of Management as a DLA Piper – Athena Scholar.

James C. Greenwood is President and CEO of the Biotechnology Innovation Organization (BIO) in Washington, D.C. BIO represents 1,000 biotechnology companies, academic institutions, state biotechnology centers, and related organizations across the United States and in more than 30 countries worldwide. BIO members are involved in the research and development of innovative healthcare, agricultural, and industrial & environmental biotechnology products. BIO also produces the annual BIO International Convention, the world's largest annual gathering of the biotechnology industry, as well as other major investor and business conferences across the world.

Greenwood represented Pennsylvania's Eighth District in the U.S. House of Representatives from 1993 to 2005. Since 2005, his deep relationships on Capitol Hill and knowledge of politics and policy have substantially raised BIO's profile and enhanced the organization's advocacy work. During his time in Congress, he was a senior member of the Energy and Commerce Committee and widely viewed as a leader on health care and the environment. He crafted legislation to reform the Food and Drug Administration, and he led the fight in Congress to allow stem-cell research to be conducted by U.S. scientists to treat disease.

From 2001 to 2004, Greenwood served as Chairman of the Energy and Commerce Committee Subcommittee on Oversight and Investigation with oversight authority over issues in the full Committee's jurisdiction. He led hard-hitting investigations into corporate governance at Enron, Global Crossing and WorldCom; terrorist threats to our nation's infrastructure; and waste and fraud in federal government agencies.

Prior to his election to Congress, Greenwood served six years in the Pennsylvania General Assembly (1981-86) and six years in the Pennsylvania Senate (1987-1992). Greenwood graduated from Dickinson College in 1973 with a B.A. in Sociology. From 1977 until 1980, he worked as a caseworker with abused and neglected children at the Bucks County Children and Youth Social Service Agency. Mr. Greenwood is married with three children and resides in Upper Makefield, Pennsylvania.

Since joined WuXi in 2007, Mr. Hu has served as the company's Chief Operating Officer, and later Chief Financial Officer and Chief Investment Officer. Over the past decade, he has scored significant achievements in WuXi's rapid development. Mr. Hu was elected to the Board of Directors in March 2016.

Prior to WuXi, Mr. Hu served as Senior Vice President and Chief Operating Officer at Tanox. His earlier career spanned at Biogen and Merck respectively. Mr. Hu has an MBA and Master's degree in Chemistry from Carnegie Mellon University.

Diagnosis: Lessons from the Battlefield

Carolyn is the CEO of Aetion, the digital health company delivering the platform that turns real-world data into the regulatory-grade evidence needed to inform health care's most critical decisions: which treatments work best, for whom, when, and how much we should pay for them.

Before Aetion, Carolyn held leadership roles at three companies central to the shift from volume to value in health care. As CEO of Remedy Partners, she led the premier company for bundled payments software and services. As Executive Vice President of Payer Strategy and Operations at Evolent Health, she led the team responsible for establishing value-based contracts on behalf of health systems and provider-led health plans. During her four year tenure, Evolent progressed from start-up through IPO to become a major force in health systems embracing population health.

For the preceding eight years, Carolyn served in leadership positions in the Medicare and Medicaid businesses of UnitedHealth Group. Her roles included Chief Operating Officer of its Community and State plan in New Jersey, and the national Vice President of Medicare Special Needs Plans, supporting people with multiple chronic illnesses and limited incomes.

Carolyn has an undergraduate degree from Harvard University and an MBA in health care management from the Wharton School of Business at the University of Pennsylvania. She serves on the board of the Center for Health Policy Development, and of Parity.org, an organization that aims to close the gender gap at the highest levels of business. She also serves on the Entrepreneurial Council of United States of Care, a bipartisan nonprofit focused on improving access to quality health care.

Development in Time of Crisis

Since 2011, he has been overseeing research & development at Janssen Vaccines as Managing Director. In this role, Johan is tirelessly leading his world-class team to develop transformational vaccines which will prevent, intercept, treat and cure life-threatening infectious diseases. Johan continues to advance Janssen's efforts in this area, utilizing cutting-edge technology and strategic collaborations to drive research and development forward.

Prior to joining the Johnson & Johnson Family of Companies, Johan acquired more than 20 years of experience in the vaccine industry, having worked with Pasteur Mérieux Connaught, Chiron Vaccines and GlaxoSmithKline (GSK) Biologicals. During this period, he held leadership roles with increasing responsibilities, including Head, New Product Development at GSK Biologicals.

Phil Pang, M.D., Ph.D., has served as our Chief Medical Officer since December 2018. Prior to that, Dr. Pang served as our Senior Vice President, Development, from September 2017 to December 2018. From December 2016 to September 2017, Dr. Pang served as our Vice President, Clinical. From January 2016 to December 2016, Dr. Pang served as Chief Medical Officer of Riboscience LLC, a biotech startup focused on developing small molecule antivirals, where he oversaw both pre-clinical and clinical development. From May 2011 to November 2015, he worked as Program Lead at Gilead Sciences, Inc., where his responsibilities included, among other things, leading a large matrix team responsible for worldwide approval of a hepatitis C treatment. Dr. Pang received his B.S. in Biological Sciences from Stanford University and his Ph.D. in Biochemistry and Biophysics from Columbia University and his M.D. from Columbia University Vagelos College of Physicians and Surgeons.

Since 2002, Dr. John Maraganore has served as the CEO and a Director of Alnylam.

Prior to Alnylam, Dr. Maraganore served as an officer and a member of the management team for Millennium Pharmaceuticals, Inc. As Senior Vice President, Strategic Product Development for Millennium, he was responsible for the company's product franchises in oncology, and cardiovascular, inflammatory, and metabolic diseases. He was previously Vice President, Strategic Planning and M&A and, prior to that, he was General Manager of Millennium BioTherapeutics, Inc., a former subsidiary of Millennium. Before Millennium he served as Director of Molecular Biology and Director of Market and Business Development at Biogen, Inc. At Biogen, Dr. Maraganore invented and led the discovery and development of ANGIOMAX® (bivalirudin) for injection, formerly HIRULOGTM and currently marketed by The Medicines Company. Prior to Biogen, Dr. Maraganore was a scientist at ZymoGenetics, Inc., and the Upjohn Company.

Dr. Maraganore received his Master of Science and Ph.D. in biochemistry and molecular biology at the University of Chicago. He is a member of the Board for Agios Pharmaceuticals and Biotechnology Industry Organization (BIO) Board and is a member of the BIO Executive Committee.

Chad Robins is the co-founder and CEO of Adaptive Biotechnologies, a commercial-stage biotech company that aims to translate the genetics of the adaptive immune system into clinical products to diagnose and treat disease. Prior to co-founding Adaptive, Chad held numerous executive-level positions in medical technology, investment and real estate companies. Chad holds an MBA from The Wharton School at the University of Pennsylvania and a BS in Managerial Economics from Cornell University.

Dr. Steve Yang is Executive Vice President and Chief Business Officer of WuXi AppTec. He is also WuXi AppTec's Head of Research Service Division and Head of Lab Testing Division. His responsibilities include management of multiple business units and commercial operation. WuXi AppTec provides a broad portfolio of R&D and manufacturing services that enable companies in the pharmaceutical, biotech and medical device industries worldwide to advance discoveries and deliver groundbreaking treatments to patients.

Dr. Yang is a pharmaceutical industry leader recognized for building R&D and service capabilities, delivering research and early development portfolios of drug candidates, and establishing R&D partnerships in US, Europe, China and other Asian and emerging markets. Before joining WuXi AppTec, Dr. Yang was Vice President and Head of Asia and Emerging Markets iMed at AstraZeneca, based in Shanghai. Previously, Dr. Yang served as Vice President and Head of Asia R&D at Pfizer based in Shanghai, and as Executive Director and head of Pfizer's global R&D strategic management group based in the United States.

The Future of Epidemic Readiness

Head of Shaping the Future of Health and Healthcare, World Economic Forum

Steve has been BioCentury's Washington Editor since 1993, covering political and policy issues affecting the life sciences sector. He also is BioCentury's Senior Editor responsible for coverage of social issues involving biotechnology, as well as the former host of BioCentury This Week, BioCentury's public affairs television program broadcast in 2010-14.

Steve's reporting about biotechnology and biomedical policy has been cited in The Economist, The Wall Street Journal, The Washington Post, New Scientist and other publications. In 2012, the FDA Alumni Association named Steve the Harvey W. Wiley Lecturer, making him the first journalist to receive the Wiley Award.

Since his appointment as Chief Executive of the BioIndustry Association in 2012, Steve has led major BIA campaigns for, amongst other things, improved access to finance, the refilling of the Biomedical Catalyst, anti-microbial resistance and the opportunity the sector presents to generalist long term investors. Steve champions the adaptive pathway approach to the licensing of new drugs, the need for Early Access and is particularly proud of the working relationship the BIA has established with the UK's leading medical research charities.

A founder member of United Life Sciences, a strategic partnership representing over 1000 life science and healthcare member companies across the UK and internationally, Steve attends the UK's Ministerial Industry Strategy Group, and sits on The Royal Society's Science, Industry and Translation Committee.

Beyond the UK Steve is a member of EuropaBio's Board and its National Association Council and is a founder member of the International Confederation of Biotech Associations. An expert and regular commentator on the sector in the media and at industry-leading conferences Steve has worked both in biotech (as Senior Director at Genzyme UK and Ireland) and at the highest levels of UK government (as Special Advisor to John Reid, MP, during his time in Tony Blair's government) for over 15 years. Steve was awarded the OBE in January 2017.

Brought to you by: